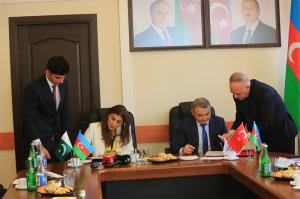 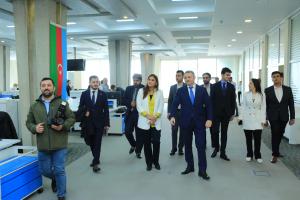 Ms. Shaikh said she would like to specially commend the excellent coordination, support and hospitality shown to the BOL Group delegation by his wonderful team

The MoU was signed in Azerbaijan’s capital Baku during the visit of a two-member delegation of the BOL Media Group, led by its Chairperson Ms. Ayesha Shaikh, in which she also met many prominent government functionaries, including Mr. Rovshan Mammadov, Chairman of the AzTv and CJSC.

The BOL Group Chairperson thanked Mr. Mammadov for supporting and meticulously arranging the BOL delegation’s visit to Azerbaijan. She said that MoU signed between these two organizations remains “a great milestone” for both the sides and would help open new doors of bilateral relations, trade and investment between Azerbaijan and Pakistan.

The BOL Media Group will fully promote and support the agenda of cooperation between the two sides, she said.

Ms. Shaikh said that she would be looking forward to not just for the content exchange and joint programming ventures, but also for the human resource development and training.

While thanking the AzTV Chairman, Ms. Shaikh said she would like to specially commend the excellent coordination, support and hospitality shown to the BOL Group delegation by his wonderful team, including Ms. Messume, Ms. Almas, and Mr. Jayhun, who all made this visit a success.

She also invited AzTV Chairman to visit Pakistan as an honorable guest of the BOL Media Group.