The Red Winter is Coming, Will Baird, from Shawline Publishing, Sits Down with Author Paul Rushworth-Brown

By EIN Presswire: Movie Industry Press Releases on May 23, 2022 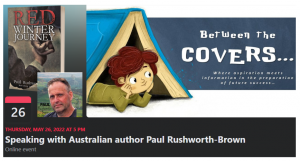 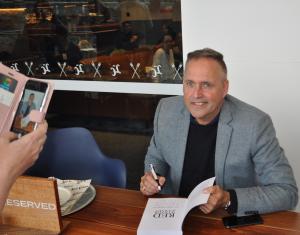 Paul Rushworth-Brown at the pre release book signing in Sydney 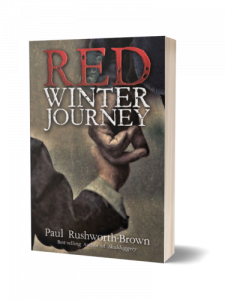 A dark and dramatic prose of love, family and war that brings the realism of history to your imagination with little effort…a great read!

Modern writers usually don't know what it was like to live in the past but Rushworth-Brown has done this with great skill in this accomplished, atmospheric and thoughtful novel”
— US National Times

Thomas placed a penny on the bar, “Ales, barkeep.” He turned around, shocked by the wrinkled face that was bent over before him, her whispery white hair poking through the sides of her wimple. Deep wrinkles in her face spread like a roadmap, her left eye almost moonlike with its colour and sadness. A reminder of the poor wretches in the world.

He had felt the pangs of hunger and would not wish it on any other, “Here, take this and be off with you, feed yer bairns or more likely yer ‘usband that has no more work left in him.”

She lifted her trembling hand, which was wrapped in a dirty, small woollen mitten with the fingers cut at the knuckles. Thomas placed two pennies in her palm.
“Would I or any man do less for a mother? For it is a wicked man that spurns an old woman.” Then he thought about his own mother, and it saddened him.
William, never the brightest of the two brothers, looked puzzled, “Why’d ya’ do that, Thomas?”

Beautiful winter backdrops and compelling action will play out before you as you are transported back in time. You will laugh, cry, and be in awe of the twists and turns, saying to yourself, “I didn’t see that coming". The writing is very descriptive, the hooks are very bold, and told in a way that places the reader in the time and place. So, turn the page and step back in time to follow the Rushworths on their journey of love, adventure and survival in this bittersweet historical saga. All is not as it seems!

RED WINTER JOURNEY is the tale that follows the journey of 16-year-old Tommy Rushworth and his battle for survival after being kidnapped into the Parliamentary Army to fight against King Charles and the Royalist Army. The brutal winter, sickness, the battle against the Cavaliers and his endeavour to escape from their spies all add to Tommy’s misfortunes.

His father Thomas Rushworth, and his larrikin grandfather, John Hargreaves, race against time to find and save him from a war they wanted no part of. In Bradford, they fear for their lives until a mysterious stranger enlists their help.

Back in Haworth, William and Lucy, have their love story tested to the limit by the persecution of social class as Lucy’s father tries to prevent their marriage in the corrupt court of the times.

Set against the backdrop of the English Civil War of 1642 one can immerse themselves within the tale and discover the more colourful, candid details of what it was like to live in this rebellious time. Will Tommy make it home? Will Lucy and William’s love endure? What is the old beggar lady's part in all this? There are no straight lines only twists, turns and intrigue until the very end.

The bloody hell of war and the saga of family tribulations drive this period drama with exceptional narrative and factual accuracy of the talented author who penned SKULDUGGERY and is becoming one of Australia’s established new authors.

Will Baird from Shawline Publishing sits down with Author Paul Rushworth-Brown to discuss Red Winter Journey, which is to be released on 30 May 2022 by Shawline Publishing of Melbourne. Listen to the interview live on FACEBOOK EVENTS Thursday, 26 May at 5:00pm (AEST) (UTC+10 hours)

A CONVERSATION WITH THE AUTHOR

WHY DID YOU WRITE ‘RED WINTER JOURNEY’? WHAT WERE YOUR INSPIRATIONS?
"The history of these people is rarely thought of and even less rarely written about because there are few records as most would have been illiterate. There
is much written about the lords and ladies but what about the common people." Paul Rushworth-Brown - January 2019

HOW DO YOU CREATE OR MODEL YOUR CHARACTERS TO FIT THE REQUIREMENTS OF THE STORY AND THE EXPECTATIONS OF THE READERS?
I believe my characters in ‘Red Winter Journey’ are well developed. I believe it is easier for readers to empathise with them. Some readers have said they couldn’t wait to find out if Tommy makes it home after all the trials and tribulations he went through. Then for the story to end like it did, well who saw that coming?