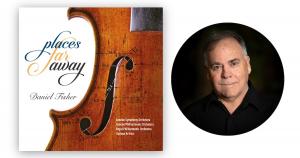 After six years of recording with multiple orchestras and renowned solo artists, composer Daniel Fisher is happy to announce the release of his classical music album “Places Far Away.””
— Daniel Fisher

Places Far Away, composed by Daniel Fisher, features the London Philharmonic Orchestra, London Symphony Orchestra, Royal Philharmonic Orchestra, as well as renowned solo artists on piano, violin, cello, and classical guitar. The 14 track album took six years to produce and was recorded at the legendary Abbey Road Studios and Air Studios in London, UK. The compositions include a range of music from solo piano to full orchestras.

Places Far Away offers a listening journey from the Mediterranean inspired "Amicizia,” to the Cherry Blossoms of Japan in "Sakura Prelude,” and the epic adventure on the title track “Places Far Away.” Mr. Fisher also navigates the listener through romantic pieces like “Silk Stone Heart.” and “Not Even the Rain” (written for his wife).

“I write music for the pure love of it” says Mr. Fisher, “This music was inspired by my global travels, people I care deeply about, and the beauty I experience in the world around me. With Places Far Away, I’ve tried to create a musical experience for the listener that is eclectic, timeless, adventurous, and beautiful.”

Mr. Fisher’s musical journey has been a path less traveled. In his youth, Daniel played keyboards in a Rock & Roll band. He then pursued a professional career in engineering. His work required him to travel around the globe visiting many countries where he welcomed and cherished experiencing other cultures. As a true artist at heart, Mr. Fisher is also a photographer. His experiences were documented and highlighted not only in his music, but his photography as well (his photographs are also on display on his website). Wherever his job took him, Mr. Fisher always had music on his mind. For decades he has worked on the pieces that tell his stories which he is now sharing with the world.

Various tracks from Places Far Away can be heard on classical radio stations around the world and is available on all major streaming platforms including Spotify, Amazon, and Apple Music. Downloads are available on iTunes. CDs available on Amazon and Daniel’s website, https://danielfishermusic.com/