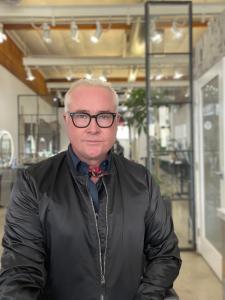 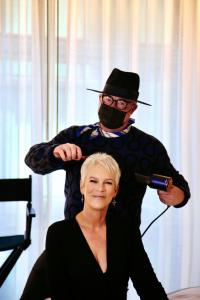 LOS ANGELES, CA, UNITED STATES, June 30, 2022 /EINPresswire.com/ -- Sean James, celebrity hairstylist, loves the short hair trend but thinks one of his closest friends and clients, Jamie Lee Curtis, is at the top when it comes to short hairstyles. "I would say how could you even have a short hair conversation without even getting hit with Jamie Lee Curtis who has been the queen of short hair for such a long time," states James.

"Jamie has had many versions of a short haircut and continues to navigate and adapt her style accordingly. When it comes to Short hair and women who have kept and owned it, I think of Jamie first," James further clarifies.

"Jaime has been bringing epic gray hair looks to the carpet since she transformed and welcomed her gray hair in her 40s," continues James. "Jamie’s gray hair and her style became synonymous with the new cool look for hair. Jaime embracing her gray hair was life-changing for many women. The change came when she was doing the Activia yoga commercials, and I remember Jaime talking about how she wanted to be really honest with her fanbase and not be hiding anything. I remember her talking about coloring her hair was hiding her real true authentic self which is all I’ve ever known Jaime to be. We used to color it a level four majirel by L’Oréal but then finally Jaime asked me to help her grow her hair out to the gray that she has now. We have colored it for several movies including Freaky Friday where I colored it the same color as Lindsay Lohan‘s hair. I also gave a bold stripe of blonde in the front for her character and four other movies as well including most recently Knives Out where I bleached her hair white with Wellas blondor and used Redken shades 10 P 10 t and 10 VV as toners."

"I get contacted so many times on my Instagram asking me what color do I use on Jaime to get the gray hair, which is really funny because Jaime has been really loving the different stages of her gray hair that is all-natural, I have so many women coming in to get the Jamie Lee Curtis haircut from all over the country, at Matthew Preece Salon, In Santa Monica. I love helping people achieve their personal style and cut it, making sure to complement everybody’s individual face shape. I’m so excited and very honored that Vogue would choose Jamie’s haircut and style to be one of the epic red carpet haircuts of all time," concludes Sean.

Call 310-907-4022 to make an appointment with Sean James.
https://www.instagram.com/seanjameshair/?hl=en

Sean originally came to America from Australia due to his wig-making skills. He has subsequently been a cutting and color educator for L'Oreal, Redken, and Phyto Universe. He has also styled for several fashion shows throughout fashion weeks in Los Angeles, Paris, and New York, including Balmain, Gucci, Vivienne Westwood, Dolce & Gabbana, Valentino, and Burberry. James has worked on Oscar-nominated films and is a two-time local 706 Guild Award nominee. He is a trusted expert panelist for product reviews and can be seen on Style Network's "How Do I Look?"

Sean is also highly involved in giving back and volunteering his time for worthwhile causes, most notably for "Women in Film Prop 8" the play, and Rufus Wainwright's "Christmas 101" for sarcoma research. Sean's accomplishments and celebrity clients are well-known, but that doesn't stop him from sharing his love of hair with his ordinary salon customers.